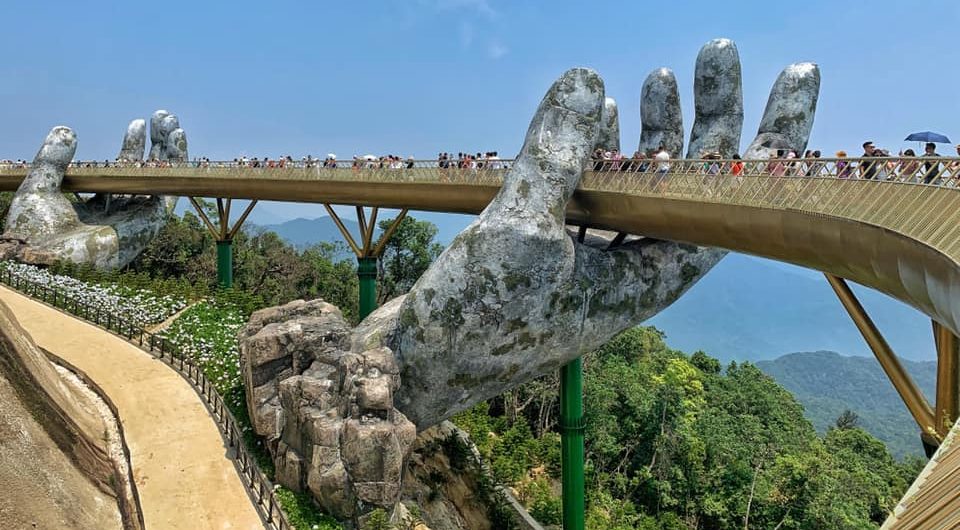 Ba Na Hills is one of the most popular attraction around Danang city. There are many things to see in Ba Na Hills. Ba Na Hills is a mountaintop resort complex that looks like a medieval castle, but inside these stone walls are modern accommodations, world class restaurants and a Fantasy Park full of exciting rides. Here are the top things to see in Ba Na Hills.
Located just 35 kilometers away from Danang city on Nui Chua mountain, Ba Na Hills is a tourist destination for domestic and foreign travelers. With a cooler and moderate climate, Ba Na Hill station was praised as ‘Da Lat of Da Nang city’ ever since the hill station’s inauguration in 1919, built by the French. 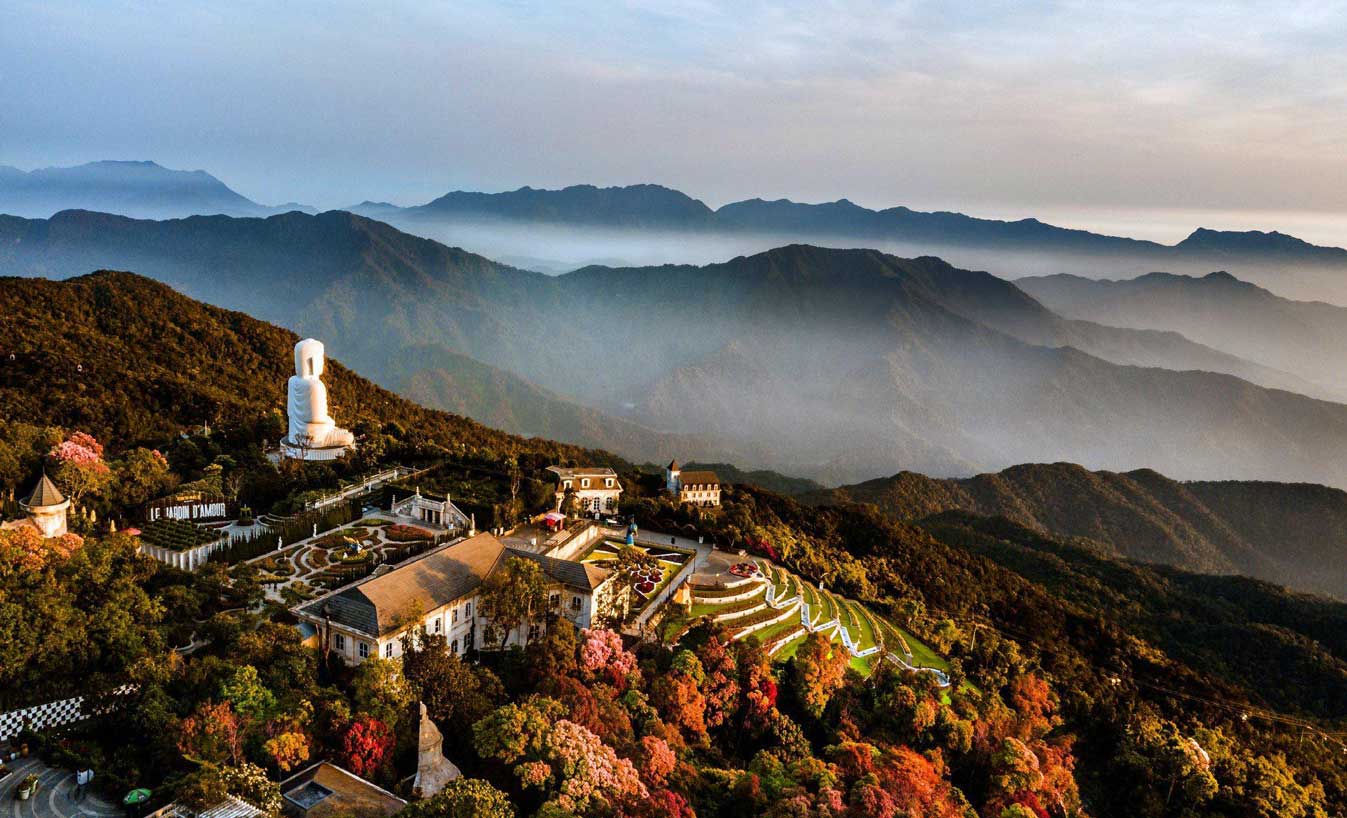 In 2018, the opening of the Golden Bridge has given to Ba Na hills the popularity like never before. But if you don’t know much about the other things to see in Ba Na Hills other than the Golden Bridge, then our article will help you to spend a wonderful day there.

There are three parts of Ba Na Hills: 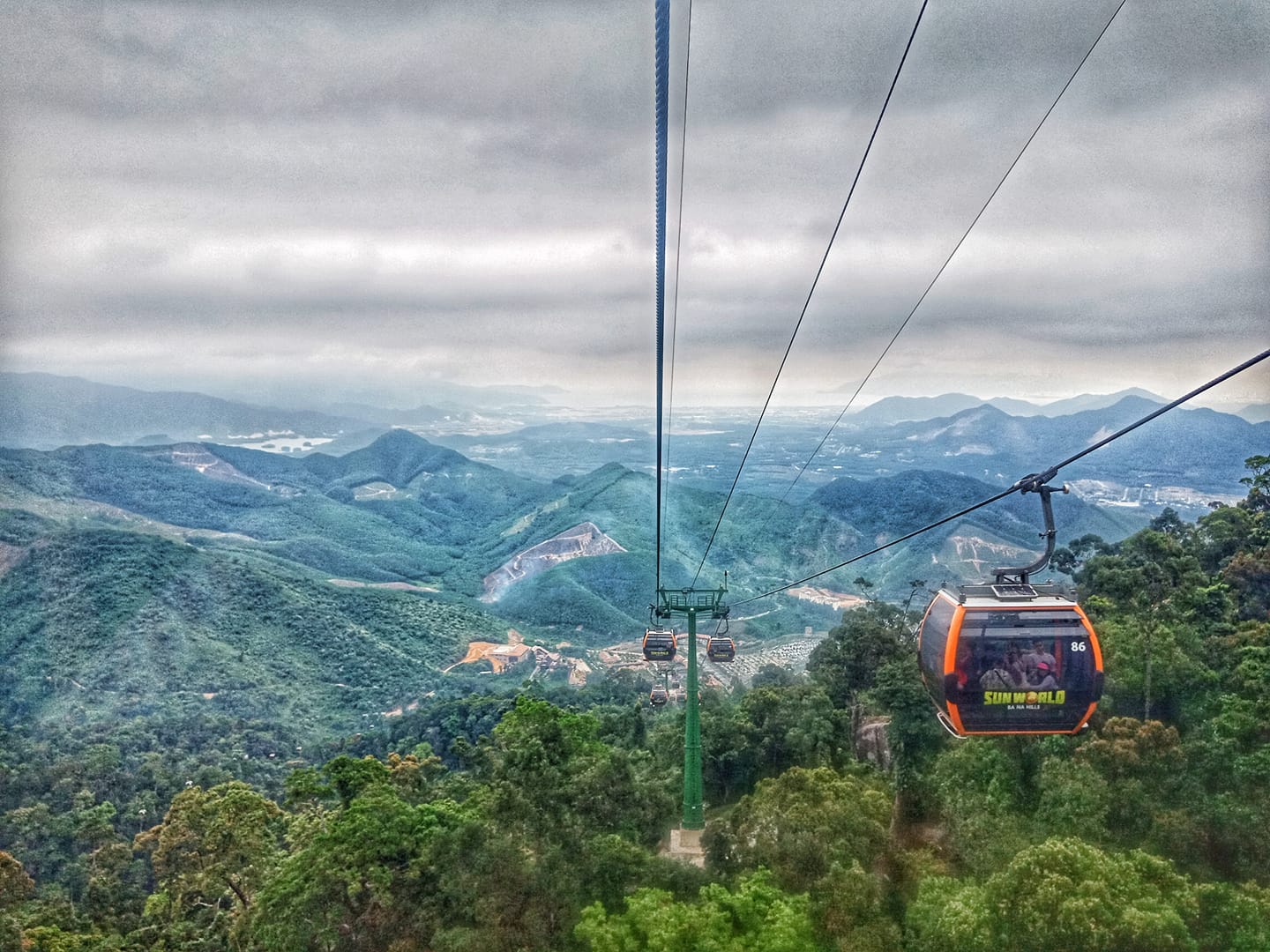 Visitors can only get to Ba Na Hills via cable cars. Ba Na Hills cable car system is one of the most impressive ten cable car lines on earth.

The cable car system at Ba Na Hills was completed in 2013 and holds several Guinness World Records, including the widest gap between stations and the greatest change in elevation. You will have a spectacular view on Danang and on a natural landscape from the cable car.

With three lines of cable cars of total 25 kilometers in length, the longest ride takes you about 20 minutes to get to the mountaintop. The lines departing from Da Nang are:

By taking this short line, you can visit Linh Ung Pagoda with the giant Buddha statue and take funicular to Le Jardin D’Amour – a lovely French garden. After that, take the Debay – Morin cable car to Chua mountaintop to visit resort complex and Fantasy Park.

This is the line that holds several world records: longest one-wire sling, greatest elevation between station, longest unpatched wire and heaviest cable roll in the world. The ride takes you around 20 minutes and travel over the beautiful Toc Tien waterfall.

From Hoi An Station, the cable car ride will take you to Marseille Station which is located just next to the famous Golden Bridge. From this station you must take a funicular to the garden Le Jardin D’Armour and Linh Ung Pagoda. To visit the mountaintop, take another cable car at Bordeaux Station.

You might think the cable car fee is too expensive but actually it’s inclusive many activities you can enjoy on Ba Na Hills and the scenery during the ride is absolutely worth every of your penny. Especially, from the cabin you can admire the beautiful panoramic view of mountains and sea.

Walk on the famous Golden Bridge 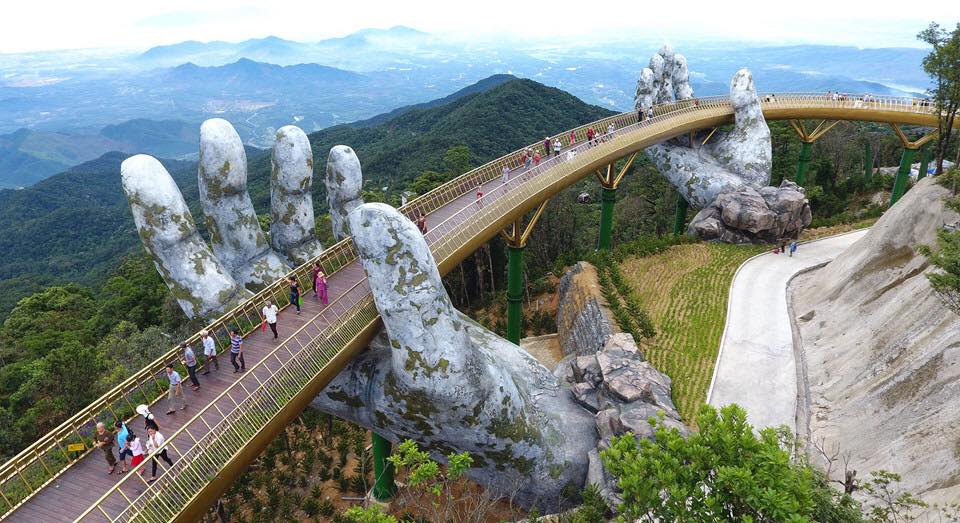 The Golden Bridge is one the most famous things to see in Ba Na Hills. This attraction was famous even before its opening in 2018. Since it’s officially opening, the bridge has created a worldwide phenomenon and become one of the most beautiful landscape on earth according to Time magazine.

Why is the Golden Bridge so famous for tourists all over the world? The most obvious reason is its staggering appearance – a delicate gilded bridge being lifted by two giant stone hands, with an amazing view on Da Nang city.

It’s safe to say that Golden Bridge is the most instagrammable man-made construction in Vietnam right now. For the most gorgeous pictures, come to visit Ba Na Hills in summertime ! 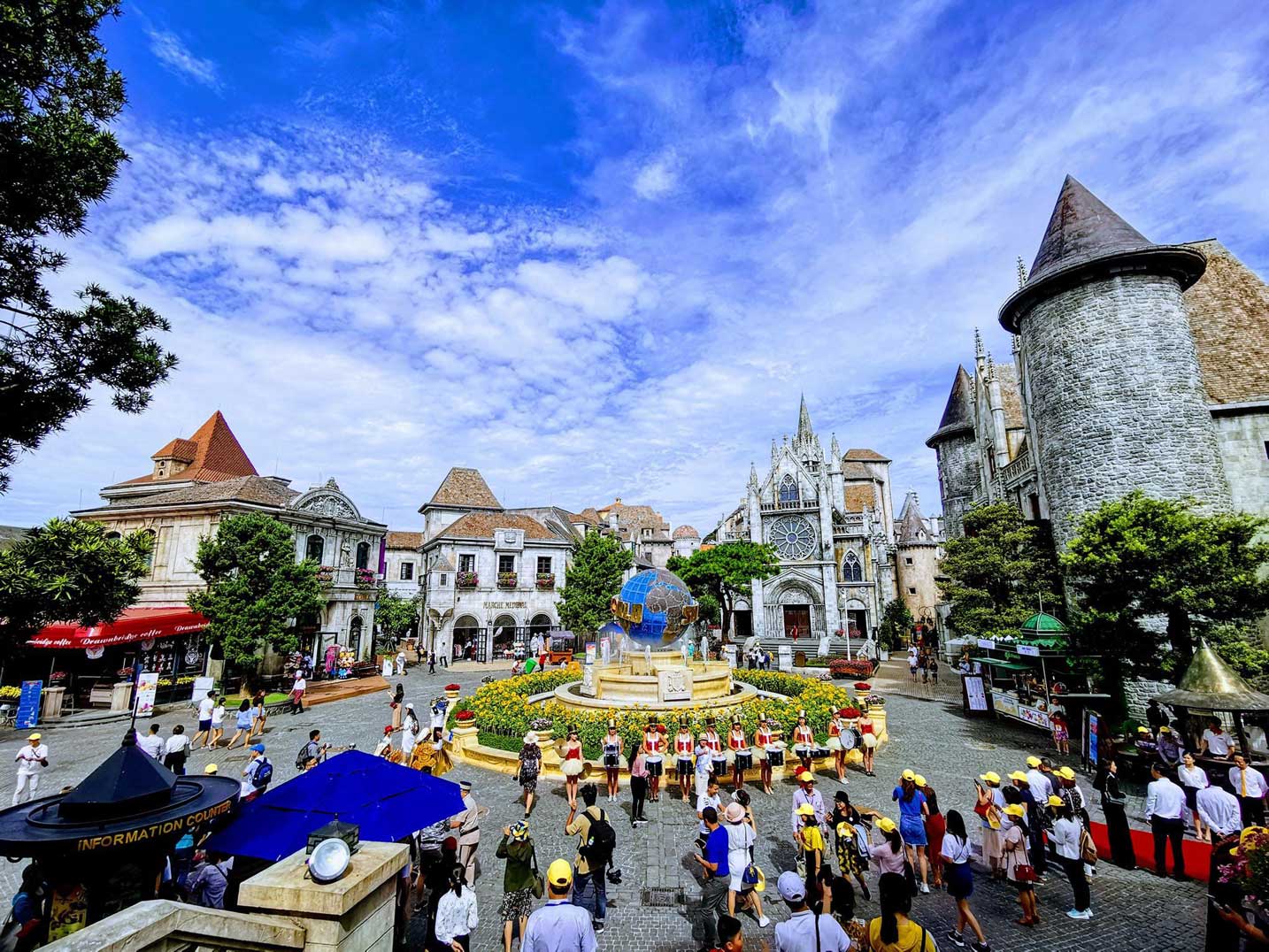 The French village in Ba Na Hills is a miniature Europe with medieval French architecture beautifully designed on every of its corner and alley.

You might actually feel like you are in the French Alps. When the mists come up at night, or when the clouds fog cover the entire mountaintop, the illusion is even more complete. The cobblestone streets and European-style buildings are remarkably well-built considering that this resort is in Vietnam and at an elevation of 1,500 metres (4,921 feet).

Any visitor would gasp at the sight of the village when see it at the first time. French village is a complete town complex that consists all most everything: a church, a square with fountain, shops, eateries and hotels. With little to none fusion with other architecture style and the cool mountain air, these monuments are the things to see in Ba Na Hills ! 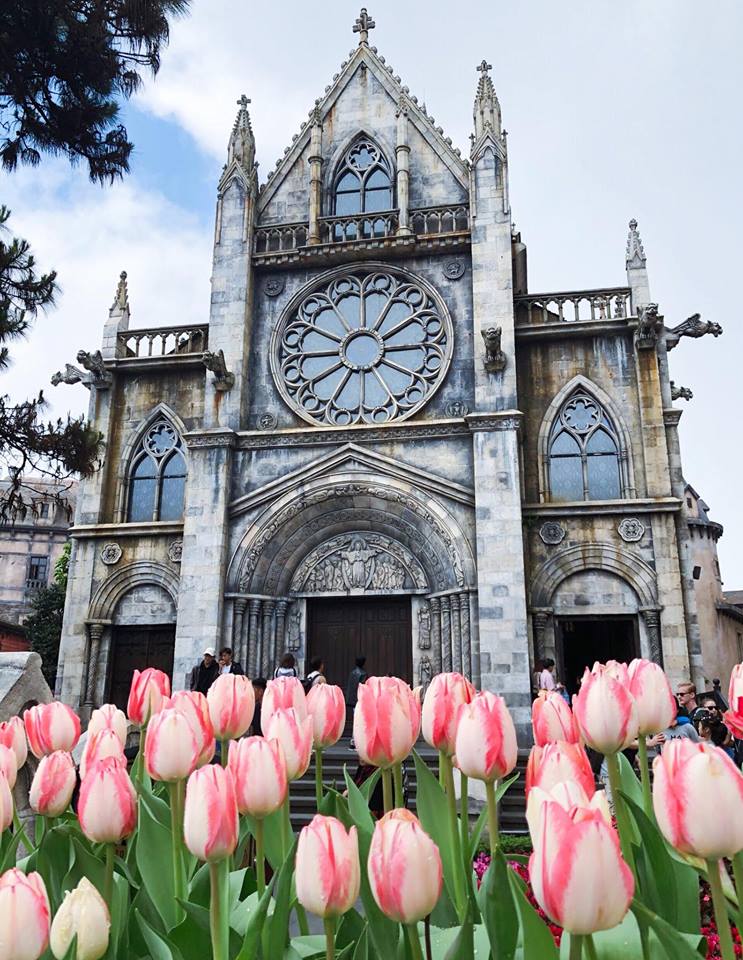 Not only the architecture and the ambience, there are a lot street artists performing on the streets of French village. They will also take pictures with you. At night, these small yet gorgeous French town sparkles with the colorful lights on.

If you want to stay longer at French village, Mercure Hotel should be your choice, not only for its luxury accommodation services but also because it look just like any other French building here, making feel like you’re not staying at a hotel but rather a local residence.

This beautiful garden is located at the lower part of Ba Na Hills, together with Linh Ung Pagoda, the giant Buddha white statue and Debay Wine Cellar. To get to the complex, you’ll take a short funicular ride.

Le Jardin D’Amour welcomes you with its gorgeous beauty of 9 different gardens which tell 9 different love stories. This is the paradise of those who are fans of flowers and European architecture, you’ll have the chance to admire the quintessence of them both. A harmony that will please every visitor who sets foot here.

Love Garden is the most popular of them.

If you would like to meet the most famous people of the world and take a photo with them, the wax museum is one the things to see in Ba Na Hills. There are some approximations on the wax statues but most of them seems to be real. 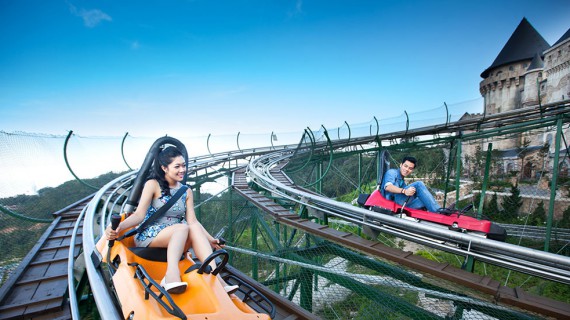 Featuring a large 3D screen and moving seats, the Death Race lets guests feel the thrills of flying in a Formula 1 air race — but from the comfort of an air-conditioned theatre. There are even machines for wind, steam and smoke to further trick the senses. Your children will be very happy to try this attraction which is one of the famous things to see in Ba Na Hills for children. 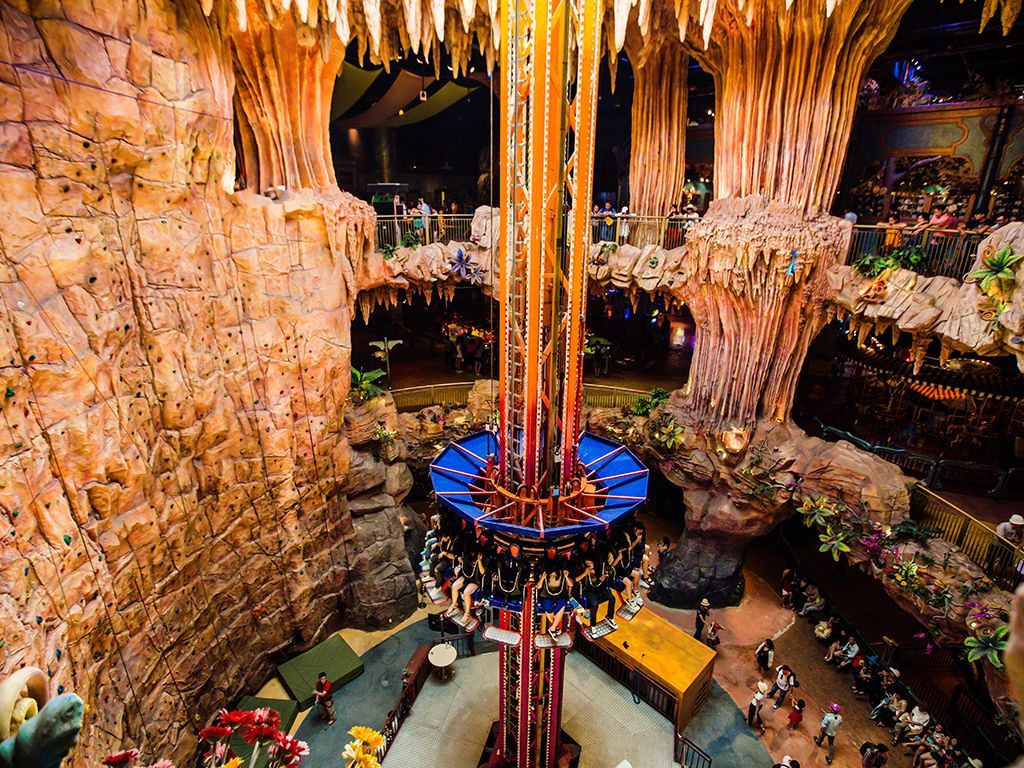 Go from stunning beauty to cavernous terror in the blink if an eye at the Drop Tower, the wildest ride at Ba Na Hills. At the top, riders can look out the glass dome and see as far as the clouds will allow. Then, without warning, you’re dropped 29 metres (95 feet) into a cave based on two Jules Verne novels: Journey to the Centre of the Earth (1864) and Twenty Thousand Leagues Under the Sea (1870).

Since you’re at the garden, do not forget to visit the 100-year old wine cellar – Debay Cellar, built by the French in 1923. The cellar was dug in 100 meters long, through Ba Na Mountain, to maintain a continuous temperature of 16 – 20 degrees Celsius. A special material was used in the creating of the cellar you might never hear about. It’s litsea cubeba resin, in Vietnamese, called ‘mang tang’ which can only be found in this area. Come to this Debay cellar, you can enjoy the finest wine in Da Nang, and even Vietnam.

Ba Na Hills is open everyday from 7 am to 10 pm. It takes a whole day to visit all the things to see in Ba Na Hills.

When is the best time to visit Ba Na Hills

The best time to visit Ba Na Hills is from January to August with dry weather.

From September to March the Golden Bridge will be empty and it will be much better to pose for your Instagram pictures. However, don’t forget to bring umbrella because in September and October it’s supposed to rain because it is rainy season in Central Vietnam.