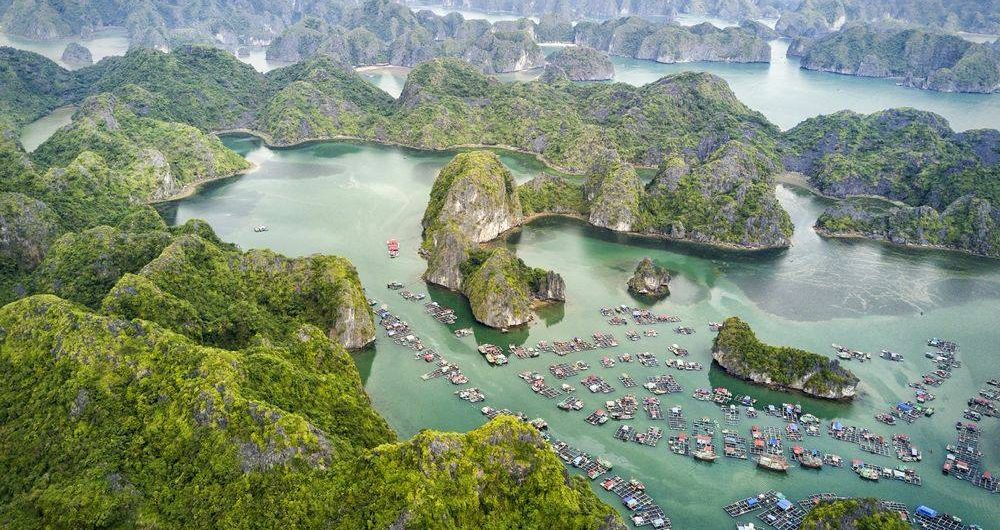 Halong Bay is now the most popular destination in Vietnam but her little sister called Lan Ha Bay becomes more and more popular because of many reasons listed here. What is the difference between Halong Bay and Lan Bay ? Let’s take a look at our advise !

What is Halong Bay ?

Halong Bay is a UNESCO World Heritage site located in northeastern Vietnam’s Gulf of Tonkin, in Quang Ninh Province. The lush emerald and turquoise waters harbor over 1,600 mostly uninhabited—and thereby undisturbed—islands and islets, according to UNESCO.

This extraordinary area was declared a UNESCO World Heritage Site in 1994. For many tourists, this place is like something right out of a movie. The fact is that Halong Bay features a wide range of biodiversity, while the surrealistic scenery has indeed featured in endless movies.

Even in a country with the diversity of Vietnam, the spectacular seascape at Halong Bay can stun the most powerful into humility. 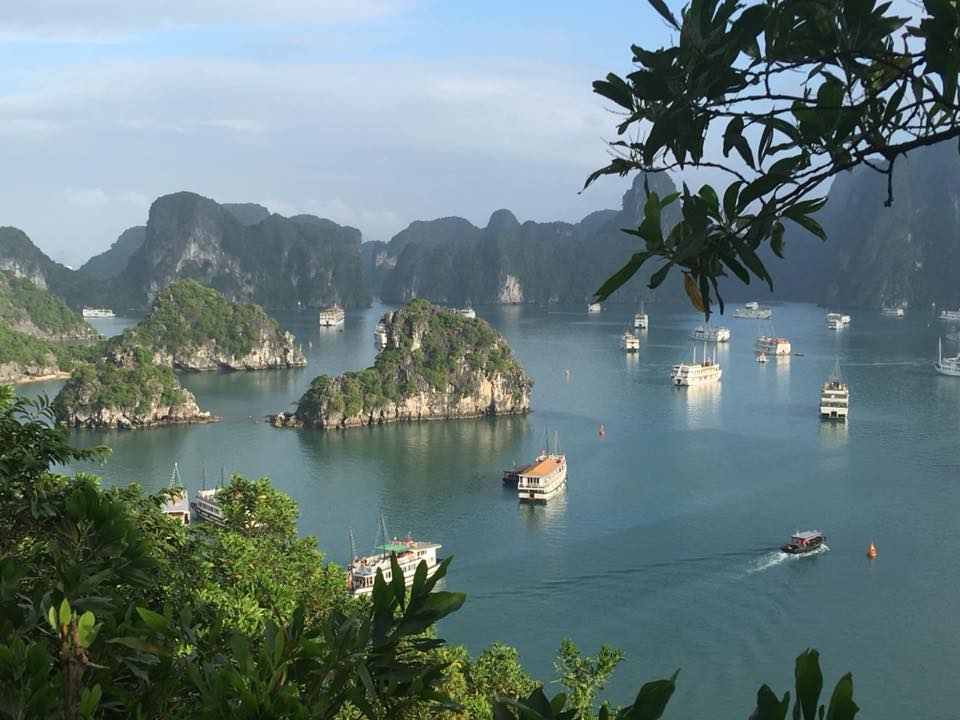 In Vietnamese, Halong means “descending dragon”. Dragons play a prominent role in Vietnamese culture, and the most popular legend has it that one such creature and her children descended from heaven to defend the Vietnamese people from invaders, spraying fire and emeralds or jade. She and her children then stayed on Earth.

The jewels eventually formed towering limestone formations, and over millennia, their protective crags and jagged edges evolved into the backdrop of green islands, towers, and water relished by visitors. A nearby bay, Bai Tu Long, refers to the children of the dragon.

“These legends strike a chord with Vietnamese beliefs and history in two ways,” says Hanh Tran, lecturer of South and Southeast Asian studies at the University of California, Berkeley. “First, the history of fighting against invaders. Second, the belief that Vietnamese people are descended from a dragon father (Lac Long Quan) and a fairy mother (Au Co), and that there is a sacred, hidden power to support them in their war efforts.”

That’s not to reduce the charm of Halong Bay to the fanciful. From a scientific viewpoint, it’s remarkable as “a very evolved, very advanced, unusual looking karst landscape,” says Robert Brinkmann, professor of geology, environment, and sustainability at Hofstra University in New York. Most such formations are on land, such as in Florida or Puerto Rico, and not on the water.

What is Lan Ha Bay ?

Lan Ha Bay is located in the east of Cat Ba Island. It’s overlooking the Van Gate, adjacent to Halong Bay. with over 7,000 ha, of which 5,400 ha is the management area of ​​Cat Ba National Park. This is a very gulf-shaped bay about 400 large islands creating a huge picture depicting the scene.

Other than Ha Long Bay, all 400 big and small islands in Lan Ha Bay are covered with trees or vegetation, even small islands. A peaceful sea with small fishing villages as separate from the rest of the world. Under the peaceful island clusters. There are many species of local specialties. Such as blue mussel, snakehead, crab, abalone, fresh shrimp live according to the daily needs of visitors. 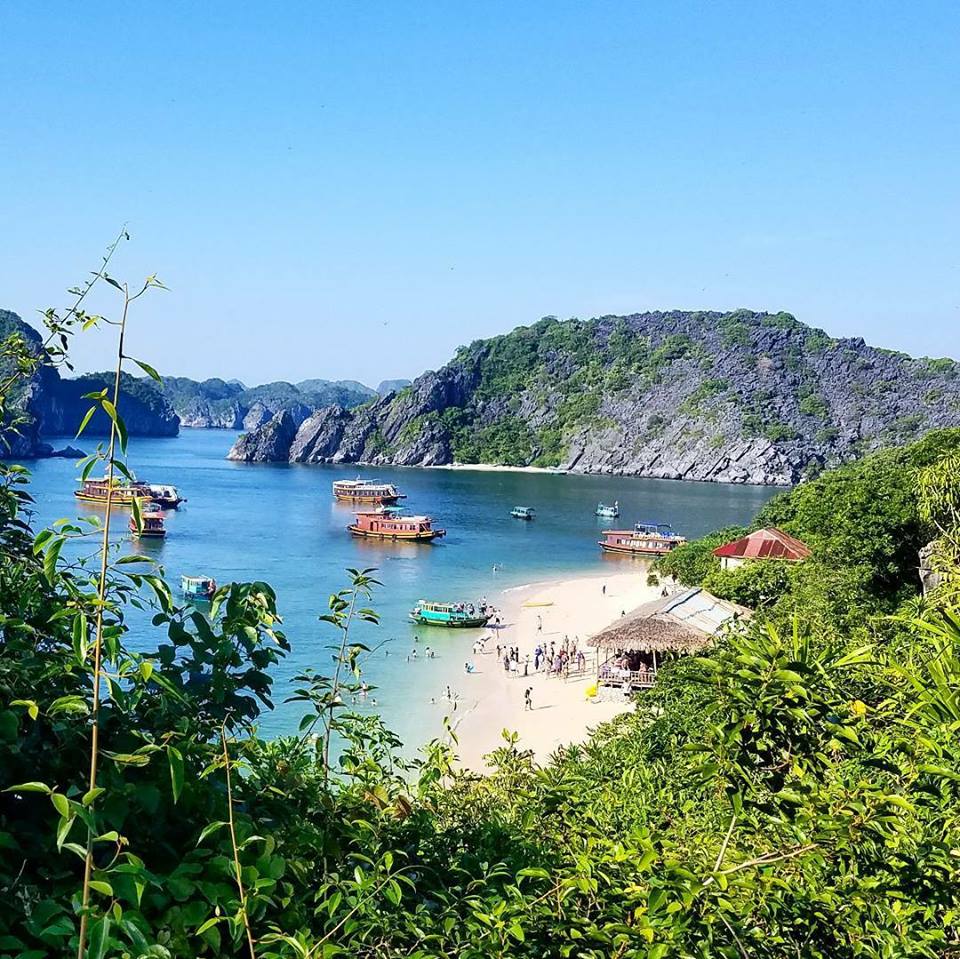 Lan Ha Bay is the home of Cat Ba Island. The bay itself and Cat Ba National Park are included in the biosphere reserve of the world. Therefore, European travelers and American backpackers often hire their own boats for a self adventure, selecting from the bay’s 139 beaches for one pleasant sandy beach to camp overnight.

They also enjoy a trip through the Cat Ba National Forest, home of many precious animals, including rare white-headed langur. Overcoming Ngu Lam peak, at the end of the journey, Viet Hai fishing village, the most unspoiled fishing village of Cat Ba Island, is where the visitors can discover many interesting characters of the local people of the island.

Halong Bay is recognized as one of the 10 most beautiful bays in the world. Not only landscape value, its geological value with at least 500 million year history is also a plus mark for Halong Bay. Halong is one of the most important areas in the world of Fengcong (clusters of conical peaks) and Fenglin (isolated tower features) karst and is considered as the best example of marine-invaded tower karst.

Halong has many caves of different sizes and interiors. The number of the cave, until now, has not been confirmed yet; some of them have been named and famous worldwide while some are less known or even unknown.

Lan Ha Bay is at the southern part of Halong Bay, far away from the boat crash in the north then coming to Lan Ha Bay, you will have chance to get closer to local fishing life, and are less likely to see as many tour boats and ships passing, never need to worry about the crowd.

The difference between Halong Bay and Lan Ha Bay is that Lan Ha Bay reserves a more pristine scenery with an intense concentration of limestone mountains which the sea surface has partitioned into smaller bays and gulfs. Many lagoons, bays, and caves still remain untouched.

The bay has up to 139 golden sandy beaches, small but pretty and isolated as “blue straits” inviting tourists to explore. Many sandy beaches stretching between two rocky mountains, quiet with no big waves, are really the ideal beaches. 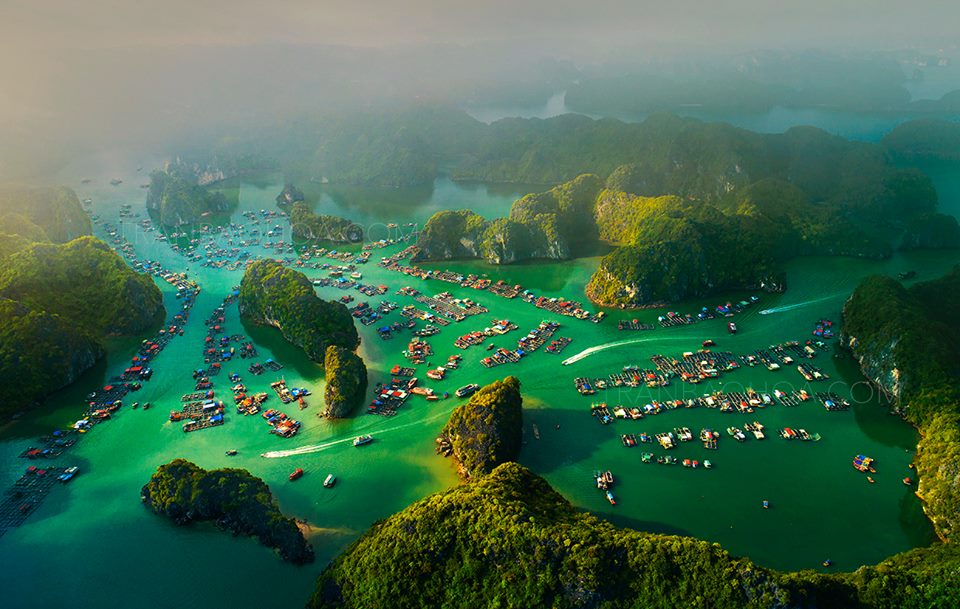 Lan Ha is a peaceful sea with small fishing villages existing isolated from the rest of the world. There are wooden floats raising different species such as the green mussel, geoduck, cobia, crab, abalone, grouper, which can serve visitors according to their needs. By small boat, visitors can glide through the ravine, lagoons to visit the caves, resting on the beach.

Unlike Halong, the Lan Ha Bay itinerary is quite flexible, which means you can do any water activities that you can imagine, jumping down from the boat, going fishing with local, doing kayaking to anywhere you desire to explore, diving or surfing or even rafting. Your passion for water is only limited by your own imagination.

Previous postBest time to visit Sapa ?
Next postHow to get to Sapa from Hanoi ? Sapa by bus or by train